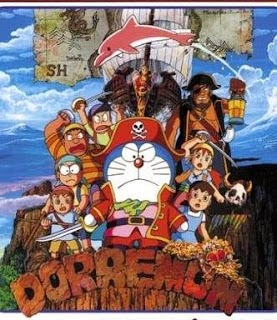 The film opens with a group of pirates who found treasures inside a cavern of an island, but all of them mysteriously disappear, save for a young boy who is stranded in the island. In the present day, Nobita and his friends are discussing school project themed around sea. Interested in pirate life and treasury, Nobita asks Doraemon to help him find secret treasures. Doraemon at first denies the pirates roaming in the present day as well as the existence of secret treasures, but after learning news about recently discovered treasury, he helps Nobita in his sea voyage in search for the secret treasure. Bringing along Shizuka, Gian, and Suneo, they roam the South Sea while playing ship and sea danger simulators with Doraemon's gadgets. However, Doraemon senses a time distortion that takes the group to the 16th century when real dangerous phenomena and sea monsters begin appearing. When a whirlpool destroys the group's ship, Nobita goes missing, while the others are rescued by 16th century-pirates boarding a huge pirate ship. All but a few of Doraemon's gadgets are gone following the whirlpool incident and they must assist the pirates in rescuing their comrades, with a female pirate named Betty having lost track of her brother and father, who is the leader of the company. Although Doraemon's treasure map is torn to half, the pirates learn that their map is exactly the same as their own treasure map, confirming the existence of the secret treasures.
Meanwhile, a drowned Nobita is rescued by a dolphin and taken to an island where Betty's younger brother, Jack (the boy seen in the beginning) lives. Although Nobita is unable to converse with Jack due to language barrier, the two befriend and Nobita learns the dolphin's name, Riffin, as well as the fact that Jack is also separated from his family, like himself. The pirate company eventually arrives at the island and begins searching for Nobita and Jack. One by one, the pirates and Doraemon's company are attacked and captured by the island's inhabitants, which strike Doraemon as being uncannily similar to a pirate simulator created in the 22nd century. After Riffin catches glimpses of the other torn half of treasure map owned by Nobita, he quickly leads Nobita and Jack to a 22nd-century-underground facility, but are captured by security guards. It is revealed that the facility is run by a 22nd-century businessman named Cash, who creates and sells genetically altered animals for money with the help of a scientist, Dr. Clone. Riffin is taken to be experimented, while Nobita and Jack are thrown to jail and reunited with Doraemon's pirate company.
Two pirates of Doraemon's pirate company who are not captured stage a plan to bail the others as well as the pirates captured in the beginning (now working as slaves) out. They eventually manage to do that, and Nobita and his friends go to break the control system and free Ruffin. Cash orders the genetically altered animals to attack the company, but they manage to defeat all of them. Eventually, Cash's masterpiece, a sea monster breaks out and attacks the group. The sea monster swallows Doraemon and Cash, but the former manages to get himself and Cash out through a pinch gadget. As the island starts sinking, the company escape outside the island. Cash is arrested by Future Time Patrols summoned by Ruffin, who is revealed to be a secret agent of them. The pirates, having recovered their leader, Betty and Jack's father, are now rich as they have found the secret treasures. Bidding the pirates goodbye, Nobita and his friends return to the present time. 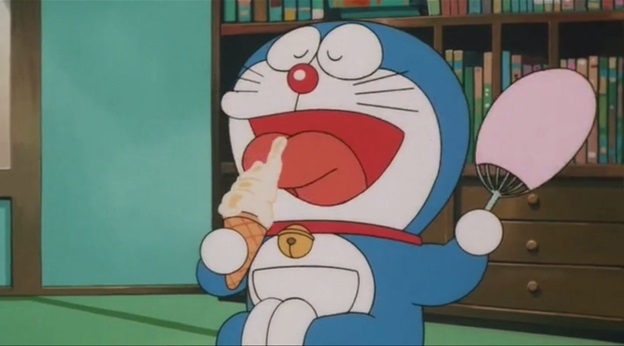 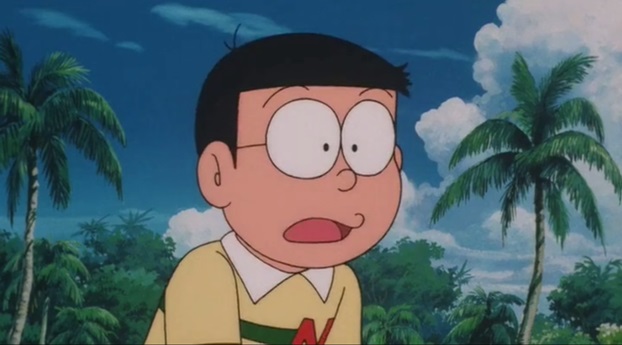 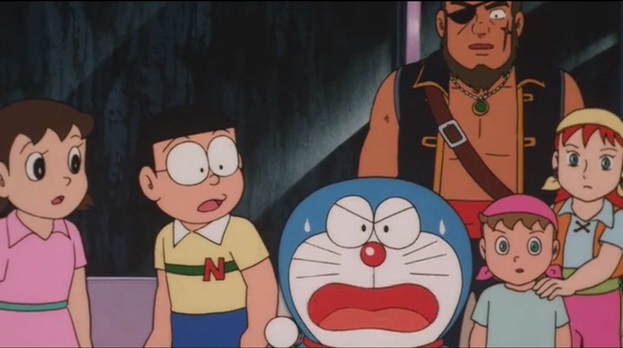 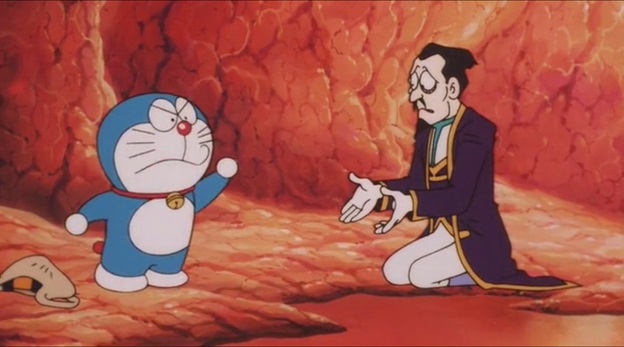