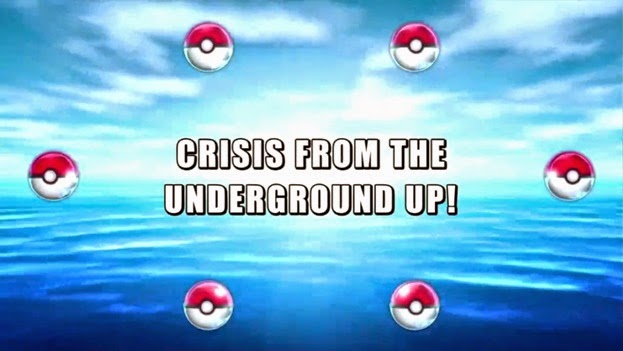 Episode 47 - Crisis From The Underground Up

The gang has finally arrived in Nimbasa City after a long and hard journey. Everyone agrees to go to the Pokémon Center but Ash wants a Gym Battle right away, until his stomach growls. Cilan, being very excited, asks the gang to lead the way. They head to a subway station where Cilan claims he is a Metro Sommelier. When they go into the station, Cilan looks at one of the model cars on display and begins an overly long explanation of the car. After they cannot bear to hear anymore, Meowth drags him away and they walk to the subway tracks. Cilan, again, is losing himself with trains and begins to embarrass the gang as he explains how the trains work. Suddenly the emergency brakes kick in on the train as a ghost train passes the train they are in. Suddenly the Subway Masters, Emmet and Ingo appear on the train and get it going again. They resume the ride to Nimbasa Central. Cilan begins to get angry at the people driving the ghost train and once again, Meowth drags him away. The gang head to the Pokémon Center where Meowth, Pikachu, and Axew as well as Ash's other Pokémon go to get pampered. It occurs to Meowth that he has forgotten to do something. In a plot twist, Meowth is revealed to have been working with Team Rocket the entire time; he enters a phone booth to call Team Rocket to give them the go ahead. Meowth returns and they go to the treatment spas. Ash decides to call Professor Oak's. Suddenly the communication lines are cut by Team Rocket's Dr. Zager. Meowth begins operations in stealing the Pokémon from the Pokémon Center. Meanwhile, the drawbridge to Driftveil City is raised and the shorted out. Meowth begins to dump the Poké Balls down the air shaft, connected to Team Rocket's train, and begins loading them on. Suddenly, everyone in Nimbasa City is confused and Cilan suggests that someone is trying to steal the Pokémon. Nurse Joy, Cilan, Iris, and Ash head to the security vault to find that all the Poké Balls are missing, including Pikachu and Axew, as well as Meowth. Meantime, Meowth regroups with Team Rocket and Dr. Zager who has begun hacking the train system, causing all the subway trains to freeze in place and stop responding. When Cilan, Iris, and Ash find Meowth, they realize that Meowth has betrayed them and was never fired from Team Rocket in the first place. Team Rocket forces them out of the way and drive away with the train loaded with the Pokémon. Ash and his friends regroup with the Subway Masters and they head to the mail carriage train. They drive to the point where Team Rocket has to pass through and catch up with their train. When they close in on it, Ash jumps on it and it begins to deflate and explode, derailing the carriage train. They realize that it was a fake train meant to distract them. When the Subway Masters regain control of the sensors, they notice a train heading for the junction and realize it is Team Rocket as they drive right past them. They claim they can track their location at all times, but as soon as Team Rocket passes the point, the trains showing up in the system begin to multiply.