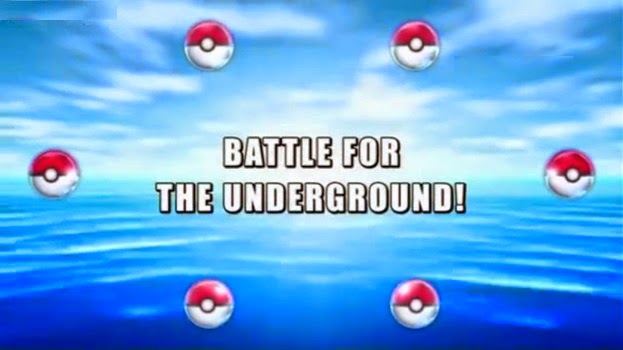 Episode - 48 - Battle for the Underground!

With Team Rocket having hacked into the subway system's computers, the Subway Masters cannot help but to watch as Team Rocket keeps on releasing fake trains as distractions. Ash suggests inspecting them one by one until they find the right one. Meanwhile, Dr. Zager is planning on rendezvousing with Jessie and James at a designated location. Cilan suggests that Team Rocket is planning to meet outside of the subway and that they are on they are on their way to the Anville Town rail yard. Meanwhile, Pikachu begins to call out other Pokémon to break out of the train. The Subway Masters rendezvous with the gang and plan to drive out of the underground subway station to catch up to Team Rocket, just as the Pokémon have finally cut a hole through the door of the train. Meowth goes to check up on the Pokémon only to see that Pikachu has broken free. Pikachu realizes that Meowth has been lying all along and gets infuriated. The Pokémon work together to destroy the coupling of the train to separate themselves from Team Rocket, forcing them to chase after the train car. When Ash and the others arrive, they see that Dr. Zager is preparing to lift the train car holding the Pokémon with a helicopter and take it away. Ash decides to go over to the train car and help them out. Using a Chandelure's psycic powers, he is transported over to the train car. They outrace Team Rocket until they manage to destroy the clamps on the helicopter. Jessie and James take over the capturing process and begin to speed up. They, again, use the Pokémon to speed up the trailer when Ash's Tepig learns Flamethrower. They attack the train and the path starts to short circuit. Pikachu, still infuriated at Meowth for lying, watches Team Rocket fly away on jetpacks and is about to pursue them (mainly Meowth), but, not before thanking Meowth for traveling with them, Ash manages to calm Pikachu down telling him to let it go for now, while the train destroys itself, as they safely arrive in Anville Town's rail yard. The Subway Masters inform everyone that the Poké Balls will be safely returned to everyone. Ash becomes excited for his gym battle and cannot wait to return to Nimbasa City.